This project has a release available. The full version is still a work in progress.

Your starter "Arenay" is a special Pokémon that can change to any type!

Experience a branching story, with two opposing research organizations you can join!
There are multiple chapters with crossing paths!
Join Quantech Co. for mechanical research!

and much more!
The Pokémon Splice Wiki
The list of every new Form and Evolution
Download more Pokémon fangames made by me!

Notes:
The development of this entire game was streamed on twitch!
It was a blast getting feedback and ideas from the Pokémon fangame community! You guy's rock!


A game by Thundaga (Cameron R)

A HUGE thank you to the resource creators
of the Pokemon fangame community:

Pokémon is owned by:
The Pokémon Company
Nintendo
Affiliated with Game Freak

Why Do People Call Me A GOAT

Pokémon Splice has been updated to Version 0.4.2! This new update resolves a crash, fixes some missing Pokedex entries, and adds a new way to train!

That EV Training Dojo looks really interesting, cant wait to use it!

Finished the demo in the Quantech route!


There's not as much for me to say about story since I was just at the small portion of Ch3, but the Arenay breakout mission looks like it's going to be really fun!

The EV training dojo is really fun! I love the music for it, and that Eevee training joke was great, haha.

I managed to get to that Cypress fight, and it was really fun! Somehow managed to beat her even with my team pretty underlevelled by comparison, so it was a very satisfying win!
The patch notes for 0.4 mentioned Poison Cellulose in the Blighted Bog, but unless I missed it, it seems to be behind the strength boulder? I was a little confused by that- I was under the impression it was still going to be possible to obtain in the demo, since you mentioned where it was.

I think the hidden switches for Rocc is a really fun idea (although I am furious at its design), but I only knew to start looking for them because of the wiki. I don't know if that's intentional (and if it is, I sure don't have a problem with it- reminds me of those secret codes for the Lego games that you'd have to look up online), but if you wanted players to be able to find it just by playing the game, there should probably be a point where that gets mentioned.
The singing man still says "I'm singing" even after his music stops. It might be because I left his house before the song was over?

My Venusaur evolved at 32, while Blastoise evolved at 36. That happened while I was playing 0.3, though, so it might have been fixed since.

There's a little bit of void poking through Maple Way: 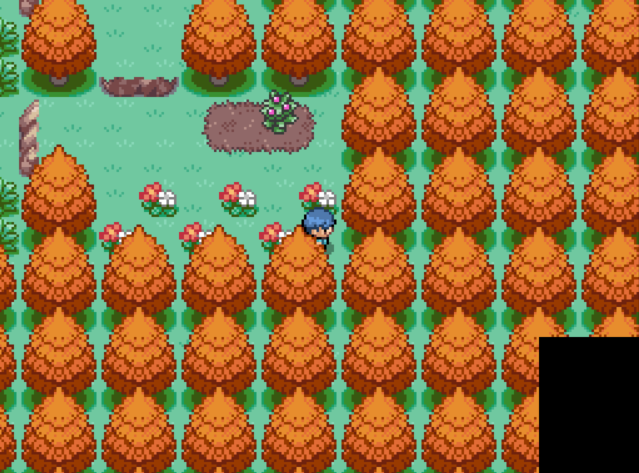 When picking up my squishy son, I got this error when I tried to get him directly into my party and sending a party member to the PC: 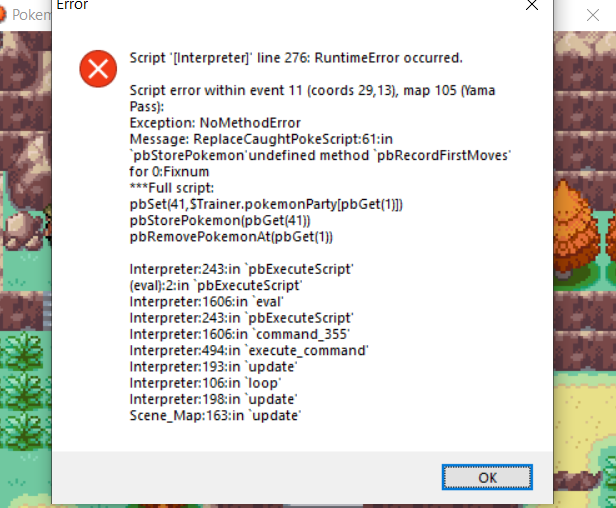 Luckily, though, sending Arenay to the PC worked perfectly!

The daycare man doesn't seem to take a step forward when he has an egg for you.
I'm sure you already get the idea so I will shut up about commas after this.

I guess I can also provide some feedback I have as well. My main gripe is the rival, who at times seems very generic and rude for the sake of it. Maybe his personality could be changed slightly to be more calm and less jerk like, maybe in a passive aggressive way, though he can have his bursts of anger at certain moments?

I really have to say, some of the art that Voltseon and Tristan is absolutely amazing! The Sabsidian and the Staconan Klingklang are amazing, and Arenay and Shuckavern are phenomenal!

Kristiano100 said:
I really have to say, some of the art that Voltseon and Tristan is absolutely amazing! The Sabsidian and the Staconan Klingklang are amazing, and Arenay and Shuckavern are phenomenal!
Click to expand...

Yeah, I know right! But my personal favourites are the Staconan Elekid Like

Lurking around this place 0.o

Kristiano100 said:
I really have to say, some of the art that Voltseon and Tristan is absolutely amazing! The Sabsidian and the Staconan Klingklang are amazing, and Arenay and Shuckavern are phenomenal!
Click to expand...

Hey man. You guys have done a great job! Just noticed a minor bug, I have the latest version so I don't believe it has been rectified. My Arenay was fainted and was holding the fire cellulose, I changed the cellulose while it was fainted to the grass and it now has 4hp, so you get a free revive. Also, I am not sure if you can re-acquire the cellulose items yet, I am still early game but they are tossable and not sure whether they should be? Thanks guys :)

Lurking around this place 0.o

kierandobson said:
My Arenay was fainted and was holding the fire cellulose, I changed the cellulose while it was fainted to the grass and it now has 4hp, so you get a free revive.
Click to expand...

The reason this happens is because the base HP stat of grass-type Arenay is higher than fire-type Arenay. We can either fix this by making the base HP of all the forms the same or have an additional check for whether Arenay is fainted when changing cellulose.


kierandobson said:
Also, I am not sure if you can re-acquire the cellulose items yet, I am still early game but they are tossable and not sure whether they should be?
Click to expand...

Pretty sure you're not supposed to be able to toss them, although it might just be because it's your own responsibility whether you want them in your bag or not. AFAIK there are no intentions of the cellulose being re-obtainable, so make sure you don't toss them in the hope you do get more.

Wait the cellulose are tossable? I thought they were like key items in that sense...

A new version of Pokemon Splice is now available!
Also, even though Galarian Slowking was just announced today, it has already been added to Pokemon Splice! Its signature move "Eerie Spell" and signature ability "Curious Medicine" have also been added!

If you encounter any issues, please reach out to me directly!
My Youtube
My Games

The back-and-forth dialogue cutscenes are a breath of fresh air, although it takes some getting used to. The blown-up pixels (i.e. doubled-doubled size) looks a little awkward, but nevertheless, making the player talk was an interesting design choice and it was executed well with the visual conversations. The emotion popups above characters also add extra character to the overall environment.

The story is also one-of-a-kind. I've never seen such a clear distinction between two joinable teams, with one team detesting the other. It was cool to see each team had its own location in the region, and its own quests and areas. I only got to explore the Mechanical Team's quests, but I also visited most of the Biogress areas. The maps were designed well and felt lively, and the style of each map was overall consistent.

The game has a fast pace, both story-wise and leveling-wise, which generally served the game well (exception being level balancing, as I go over below). Nothing drags on too much, and there isn't that much forced exposition that breaks the flow of the game.

Trainers are majorly overleveled. I came onto Iron Pass with a level 6 Arenay just starting off, and the second trainer I battle has two Pokémon (like the other two trainers battled before!), one of which is a level 11 Makuhita. I blacked out four times in the first half hour because of this, and had to grind to beat the second trainer (on both passes). After joining the Mechanical Team and I head for Ferrous Cave, the first Biogress Grunt has three Pokémon, all of which are 5 levels above my average level. This also happened to wild Pokémon and trainers east of Lumigen City, which are all a whopping 6 levels above my average level. All this really took away from the fun of the story.

The Larvitar titled Thundaga and its NPCs dialogue is a little on the nose. Self-inserts can work, but they shouldn't be as blatant in my opinion.

I also noticed a few small bugs or annoyances that I wanted to point out:
- The text on the area location popup doesn't scroll in like the header does, and instead instantly appears and disappears. If you open a menu while the bar is poppuping up, only the header is hidden; the text will remain on top of the black overlay.
- Holding down the B button on text will make it automatically skip through everything, meaning you can no longer accelerate text without confirming/continuing.

Thundaga said:
A new version of Pokemon Splice is now available!
Also, even though Galarian Slowking was just announced today, it has already been added to Pokemon Splice! Its signature move "Eerie Spell" and signature ability "Curious Medicine" have also been added!

If you encounter any issues, please reach out to me directly!
Click to expand...

Oh yeah! Gonna have some fun with the new update. Looking forward to the new areas and Pokemon!

Another new update is available! Version 0.5.1 contains the following changes:
As always, please reach out to me if you encounter any issues! I really appreciate everyone's feedback!
Last edited: Oct 4, 2020
My Youtube
My Games
S

I said this on Disord already but having Centiscorch on the Pollen Path is a bit overkill. I wonder why you didn't go for Sizzlipede there :).

For the rest I am replaying the game again, looking forward to finding Gen 8 Pokemon! :D

Another new update is now available for Pokemon Splice! Version 0.5.2 adds the following fixes:
As always, please reach out if you encounter any issues!

By the way, I just wanted to say thank you so much to all who voted for Splice in the community spotlight! It's an honor to be among the selected spotlight titles for Jam #6! More Splice story content is on the way soon, now that most of the bugfixing is done (I HOPE!).
My Youtube
My Games

Why Do People Call Me A GOAT