Menu
Log in
Register
Install the app
You are using an out of date browser. It may not display this or other websites correctly.
You should upgrade or use an alternative browser.
Resource icon

Have you ever wanted to have Field Effects in your game?
It's personaly, one of my favorite mechanics of any fangame, so I'll teach you too how to do it too.

What are Field Effects?
If you have played Gen 6 or Gen 7, then you probably know about Terrains (Electric Terrain, Psychic Terrain ...)
Field Effects, are in a way, the exact same thing, but they are present from the very start of the battle, and are map based.
Because of this, it can be used to make fights more interesting, and based on what kind of effects those fields have, they can make the game more strategic.

What I will teach you will be:
How to make it be active from the get go-
How to let background change based on the field-
How to implement battle start up messages-
How to buff overall move types, specific moves, specific move kind-
and a couple other stuff...

This step is mostly for future use, it will not do anything on its own, but we will need it later on.
I will explain what it does when we get there.

After the second end, we will define a new method,
let's call it pbChangeBGSprite

Inside of it, we will create a new variable, you can call it whatever you want, but you must remember it, as it will be the thing we will use the most.
Personally, I use $fieldeffectsbg , and I will do so for this tutorial too.

Once this new case has been created we will add 2 new cases, one for what I will call "Interior Field", which won't have anything special on it, it will be the default battle.
And, lets make, like, a Snow Field for example.
Default Essentials already comes with Backgrounds and Battle Bases for these two, so let's use those.

So, to define the background and battlebase for these fields, we will do it like this:


Ruby:
This way, everytime we have to change to one of these fields, the game will know what background and battle bases to load.

And thats pretty much it for how this part, if you want to add more field effects, you just have to continue adding more when x, where x is the number of the field, its very important that the field always has that number, as it will now be defined as such. 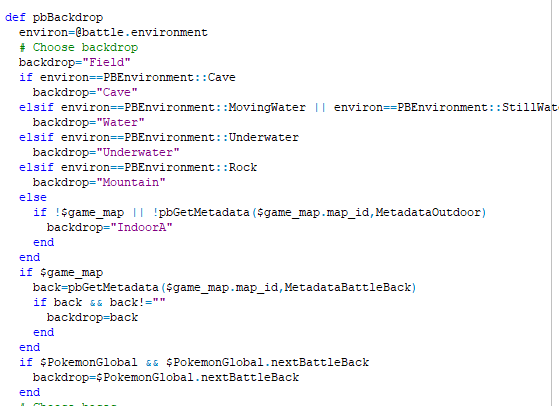 Replace that entire section with:


Ruby:
This piece of code does a couple different things:
Now, go to
Code:
and search for:


Code:
Replace xx with whatever number you have afterwards, for me it's 13: 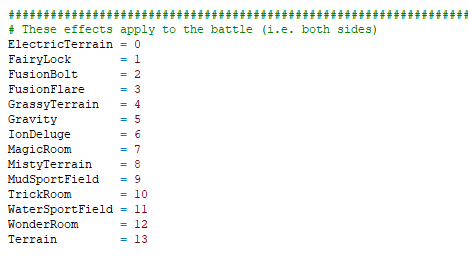 Don't forget to go to the metadata of the map and add the correct background: 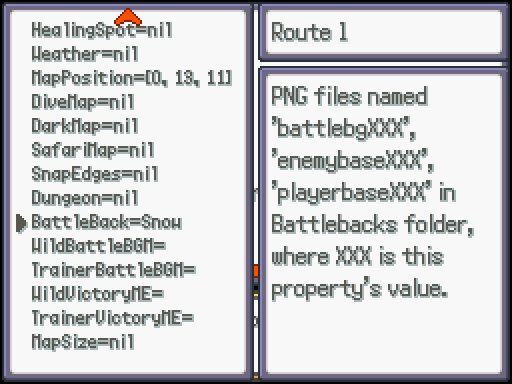 Since we are going to do a Snow Field I'm using the Snow background.

In this step I will teach you how to boost specific types of moves, specific kind of moves (physical or special) and specific moves.

Since we went with a Snow Field for our example, I will continue to use that one, though I will take some creative liberty, so I can teach you how to do all of those kinds of things.


Let's start with Type Boosts, since we are on a Snow Field, lets boost Ice Type moves.

In PokeBattle_Move search for this piece of code:

Directly under it, lets start our Case $fieldeffectsbg.

Since Interior Field has no boosts or anything special about it, it won't appear anywhere if you're wondering.

Okay, so, once that is done, lets boost Ice type moves.


Ruby:
The first line directly under when 1, checks the type of the move, in this case ICE, the line under that will multiply that moves power by x1.5, and the last line will pop up a message whenever that happens.
These messages don't really have any impact, and I guess you can delete them, but I feel like they are fairly important as it helps knowing what is being boosted or not.

Now, this code will boost any Ice Type moves, lets get a bit creative shall we?
Lets make grass moves weaker in this field, but ONLY, if the Pokémon using the Grass Type Move is grounded.


Ruby:
What we are doing here is basicaly checking if the used is Airborne, this mean checking if its a Flying Type, has the Levitate ability, is levitating because of moves like Magnet Rise, etc...

This way we have Ice Moves that have a 50% power boost, Grass moves on non-airborne Pokémon that have a 50% power decrease.
Now let's do Move category specific, either Physical or Special, you should be able to do it on your own now:
But here's my example, in this case Im buffing Special Water Type Moves, and decreasing physical Flying type moves.

Directly under it, start the $fieldeffectsbg case again.
For this part, lets buff all the "Wind" related moves I can think of.

With this all Wind moves are boosted by 50%, you can use the same method to make moves weaker too.

PS: If you're using default Essentials, your game probably doesn't have Fairy Wind, so it might cause an error pop up while testing, either add the move to the moves.txt pbs file, or delete that part from my example!

That should be it for this part then!
Step 3: Starting the field ingame

None of the first two steps will do anything without this one, I guess this should've been the second step then oops.

Anyway, this step is still kinda of confusing for me, but lets do this then.


In PokeBattle_Battle search for the line # Initialize Battle.
You should have this: 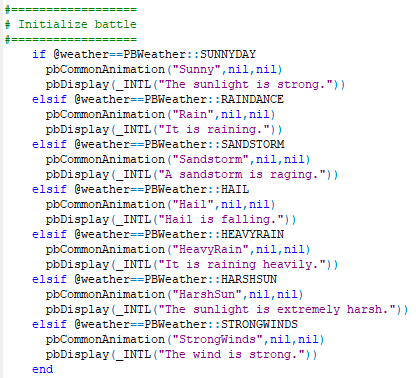 Now, lets add the start up battle message shall we?

Directly under that
Ruby:
add:


Ruby:
You don't really need the Forest Field part, but it's there as an example of how you should add more field effects, just keep on adding when x.

If you go test it in game, it should be good to go! 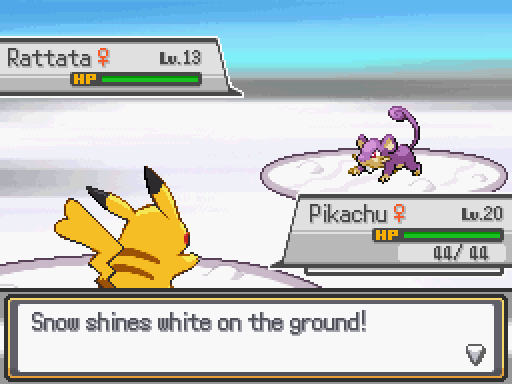 Now all you have to do is test some moves, to see if it all works correctly. 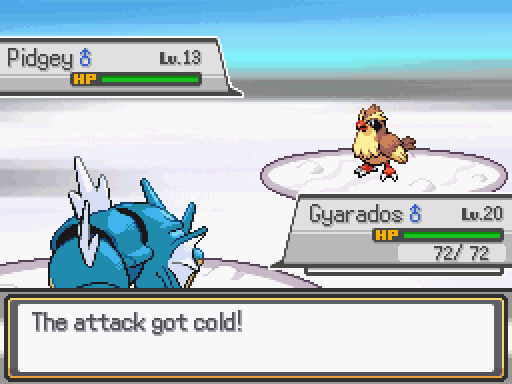 That's all I can think of doing for now, if theres other specific things that could be interesting to do Ill update this post.

Extra Stuff:
Abilities and moves starting up the field:


First, go in
Ruby:
And search for: 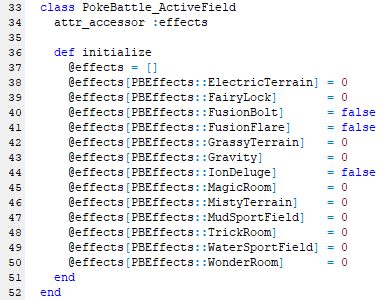 You might have added more things to it, but it's not a problem.
In my case, right after
Ruby:
I will add: 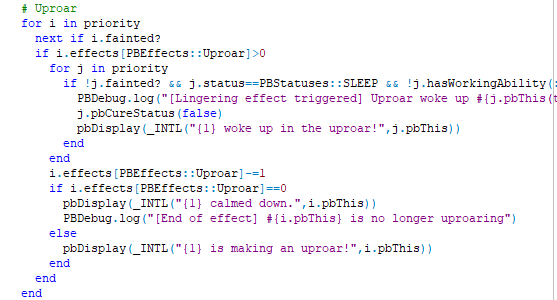 
Ruby:
This gives a coutdown system to the Terrain moves and Abilities, so that it changes back after x turns.

Now let's make a new move, called Snowy Terrain!
I'm gonna use Electric Terrain as the base, do the same, its way easier that way:

Ruby:
In this piece of code, we have $tempfield = 1, change the 1 with whatever the number of your field is.
We also have #@battle.field.effects[PBEffects::Terrain]=8 if attacker.hasWorkingItem(:TERRAINEXTENDER)
This checks if the user is holding an item that can extend the duration of terrain moves, if you have such an item, uncomment this line.

Before we go to abilities, quick side note, if you have Electric, Misty, Psychic and Grassy Terrain moves, do the same thing to them: 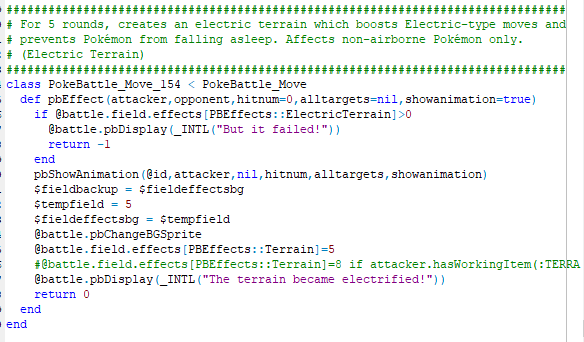 If you don't change their code too, you will be able to put the Snowy Field + Electric Terrain combo for example, you don't want that. (Unless that is a new mechanic you want to do? Up to you)

Directly under it, add:

Ruby:
Change $tempfield = 1 and ($fieldeffectsbg!=1) with the number of the field you want it to change to.
And that is it!
Don't forget to do one for Grassy Surge etc too if you don't have those yet.