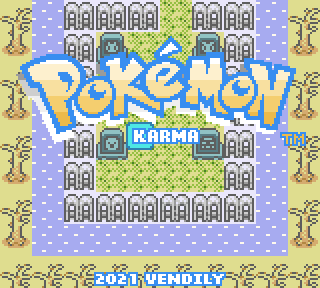 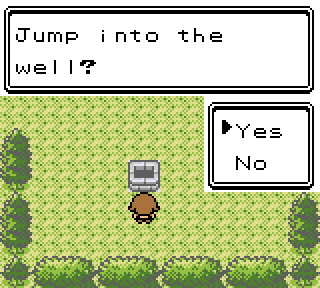 Game Download: https://www.mediafire.com/file/02ra6o6xhwtku2w/Pokemon_%5BK%5Darma.zip/file
Made Using: Pokemon Essentials
Team: Vendily
Notes: This is definitely more of a game made as an excuse to code something cool than to tell a story. Technically though, it was more planned out than any of my entries so far, but that doesn't really mean much haha. Went into it with just the Growlithe and Skiddo powers, and the intro. Oh and the fact it's all ghosts.
It's not very long admittedly. 10 minutes, give or take. The change in font broke basically every menu including the options menu, and I wasn't in the mood to fix it, so there are no menus.
The title has no specific relation to the Game itself. It's just named after Arma and Karma. 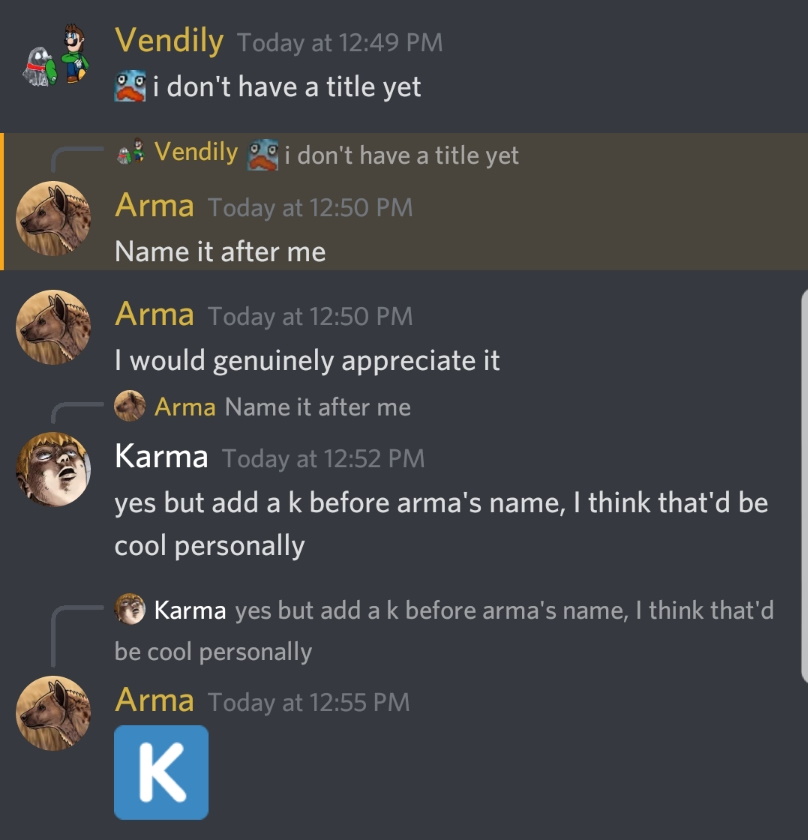 All Human NPCs from Pokecrystal

Palettes are generally taken from either in-game screenshots of Crystal with bgb's GBC LCD Filter on, or from GBC LCD rips from the GBC Zelda Games (mostly the two Oracle games.)

The bottomless pit tiles are edited from Oracle of Season
The sign, house, grave stone, stone fence, well, bridge, key, and the torch tiles/event are from Link's Awakening (with some minor edits & recolouring)
The switch tiles in the bottom of the well are also from Link's Awakening, but edited to not only be based on colour for activation state.
The dead tree tiles is from the GS spaceworld 97 partial disassembly. 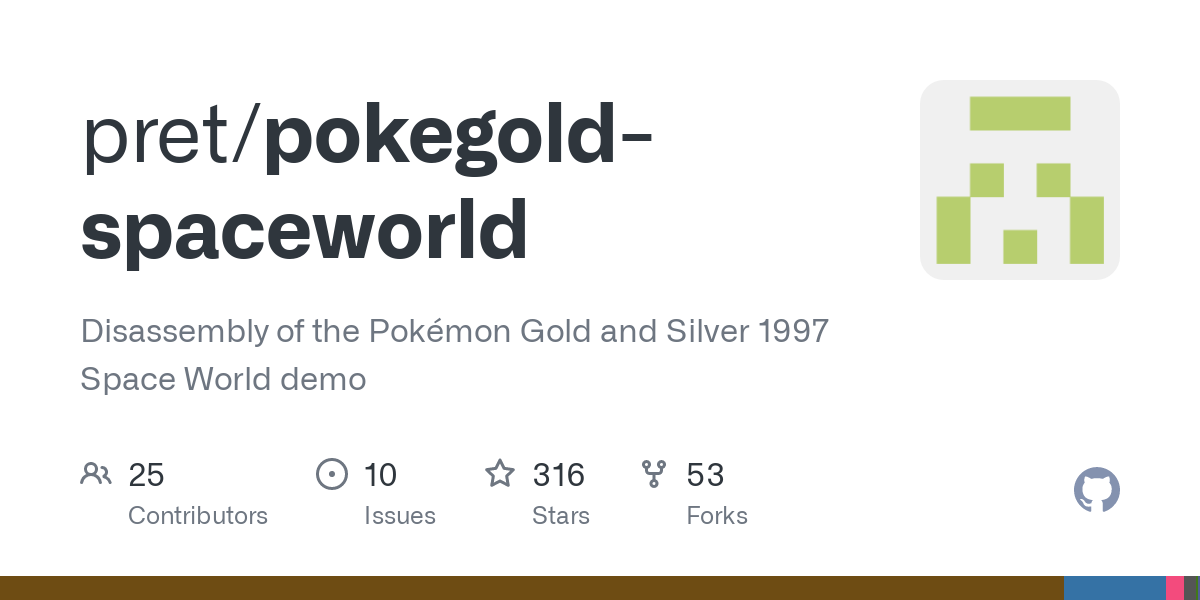 The other pokemon overworlds are from Escape from Dream World's Resource Pack.

This pack contains the audio (Base essentials sound effects + an ME by Joo *Johnnyz* Buaes + Standard RTP music) as well as the graphics, A large portion being battlers and overworlds.

reliccastle.com
But that was still me.

Indie game development community and Discord server specialising in RPG Maker.
www.hbgames.org
Edited to reuse as many methods shared with Essentials as possible

Very short, very sweet! The puzzles were all really short but clever and I liked the mechanic of switching around your spirits. I also like how charming it was in its retro style! Big props from me Vendily :D 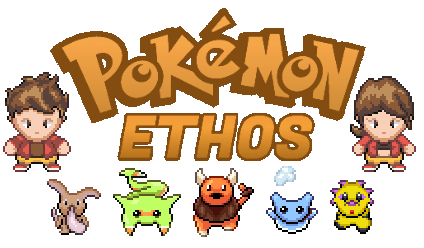 Made a bug fix update since that's allowed after all!
We got two fixes here!

First up, no more hopping into the void with Skiddo from all sorts of odd spots. Hope you had fun exploring the out of bounds spots, I guess.
And also, you can't switch from Octillary while in the water, which was something I thought about, and didn't fix before the deadline, because I got distracted with fixing a bug (that wasn't a bug in the end, just me misreading my own code) with the same spirit.
Last edited: Aug 11, 2021
May or may not use this in my Game Jam, but It's certainly public! It's very tiny (16 by 16 to 2x scale) pokemon sprites with mildly limited colors + shiny + gender differences. So far i'm up to Sandslash + some of the starters (I have all of them done, but I've updated my restrictions since when I made them and now so the missing ones need to be updated.)

I like working on fangames and stuff I guess... Nah I love it, it's great!

My Resources!
Free-to-Use Mega Evolutions!
Easy to Use Hidden Power Checker! (For v18.1 and v19.1)

Finished the game, super quick but super good. Not too much to say about it but you really showed up the unique Vendily charm. Love each of the abilities, love the Zelda charm. Aaaa the pegasus boots Skiddo ability was so cool, my favourite. I also really love the zelda style blocks of map where the screen is locked and you move from mini map to mini map. I was actually thinking about doing something like that for the next jam. No real improvements to suggest, a nice short and sweet game.

Really cute little game! It took me a while to figure out that bridge section, but it's so clever! The spirit switching mechanic was very fun. Great coding!

Hi, I played your game! Here's my review:


Disclaimer: The following is my personal opinion, warped by how I personally played the game. Things I do and mention may rub off and be experienced differently to other players.

This was a really awesome bite-sized game! I definitely think you accomplished what you set out to do, which was to code something cool, because it is very cool. I mean, yeah, it's really really short, but I absolutely loved the content of the puzzles (but especially after I figured out Skiddo). I actually felt like a genius when I figured it out, and I felt REALLY cool when I got to experiment with it. Original puzzles are kind of uncommon in fangames, so I'm really happy to see what you did here!

I'd say my only critique is that figuring out the Skiddo mechanic was a bit too cryptic. Although it felt awesome to figure out how it worked, I think I would've gotten the same satisfaction just playing with how the mechanic could pushed over a few puzzles, and then gotten a slight hint or so, y'know? Of course, I know you really didn't mean to add anything more than that, I'm just thinking out loud.

I also need to give credit to the extra effects given to the game. You clearly didn't have to, but you did end up making a story that wraps itself up, giving us a nicely done package. In addition, the map transitions to emulate a different kind of feel of moving around and progression felt really nice. It's like, you definitely could've just made a Jam Game with only default Essentials stuff, but you decided to add visual polish anyway. But hey, I should've expected that kind of standard from a Vendily game!

That's all I have to say!

This was a super cute and fun little game.

I spent way longer than I'm willing to admit trying to push a rock into various holes before I solved the Skiddo puzzle.

The mechanics are a blast- every power is fun to mess around with, and the shifting between spirits looks really cool! And the animations for Growlithe and Skiddo's powers are so much fun!

Even though the story's simplistic, it was still really sweet to have a somber little story about finding ghosts and laying them to rest alongside the player!

The Gen 2 aesthetic meshed really nicely with the simple story and mechanics IMO, and the minimap movement was fun and unique!
You know what I'm going to say... Skiddo. And I'm realizing now that there's even a demonstration of how to get across in the GIFs on this thread, lmao.

I think the main part of the issue is the rocks blocking the way to the well. Since pushing a rock into a hole is a standard Pokemon puzzle, that seems to be what everyone tries first. (Although the "bridge under construction" sign probably puts the idea of building a bridge in their head, too) Honestly, since they're not really blocking much- the only thing past them is the well, which you can't get into without Octillery- I'd personally suggest just removing them altogether, so players don't waste their time pushing them around.

I think it'd be nice if there were a button to let you go in reverse when cycling through spirits. (If I want to go from Octillery to Skiddo, for example, I have to go Octillery->Normal->Growlithe->Skiddo, rather than just Octillery->Skiddo)

I also think it'd be nice if Skiddo could just push rocks without having to press Z every time- it can be a bit annoying to have to press it repeatedly (Of course, I mostly had that frustration because I tried to push the rock in the hole, so there's a good chance it's not actually a problem for the small distances you're supposed to push rocks)

Hi I just played your game! Very nice experience. Hears my feedback:
I loved the simple yet effective style of the game overall. Gaining the abilities was a cool feature. Using the different abilities to traverse the caves was very satisfying. While messing around in that first cave I realized you could bounce off of things with the skiddo ability and knew right away I could use it on the signs to get across the gap. Although I must admit I was kind of hoping I had stubbled on some secret built in speed running mechanic by doing this. Of course that was the way to solve that bit. It could be cool to add multiple ways to solve puzzles. In general expanding on this type of game/gameplay would be really cool. The game gave me some vibes of when I played Link to the Past. I definitely got stuck in some puzzles in that game. Anyways I liked the ending although I'm not quite sure what to make of it. Did the player gain the abilities from the ghosts of those pokemon? And what of the player themselves? Did I just die at the end?! Hmm I mean it makes you think. I like how you can kind of decide for yourself what the ending means to you. Let your imagination fill in the blanks.
Thanks for making this! I had no issues or bugs playing and had fun :)
Share:
Facebook Twitter Reddit WhatsApp Email Share Link
Top